Commercial spaces are always at a premium and meetings in cafes/ bars dig steep – we are in the growing times of limited spaces and work expansions –  but is this some new phenomenon? Nope! We just gotta learn to live with all of this uncompromisingly and in vogue 😉

| manymanythings for Like Minded People | is our first ever collaboration – Yeah! – Interiors for a broadcasting and media production house who rightly calls itself Like Minded People and we would have not taken this project up or pulled it off if not for the director / founder / main mad like minded man Piyush Raghani. Thankyou! We totally love you! 😛

Inspirations and Restrictions : A month in hand, constrained but not limited by budgets, a space flooded with sunlight but no electrical wiring set in motion the thought to use metal plumbing pipes and the decision to exploit it to the fullest! “You bought it all!,” he said – Yes! we gonna turn it twist it – bend it cut it – everything that it can be – be a Pipes Play  and thus it began…. 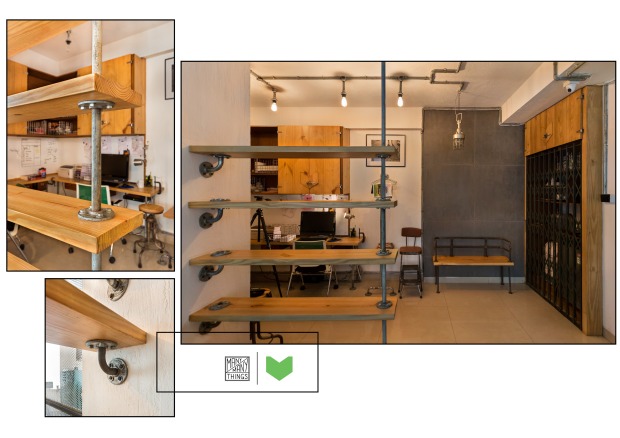 Pinterest and its DIY tricks made the mood a reality and helped us contour a mantra for not just this project but life – If you can’t hide it expose it! Hence, the walls, furniture, metal and wood finishes are absolutely raw, the only attempt was to run them uniformly in the entire space – adding more texture to the unfinished rough walls, scrubbing and galvanising all the metal, polishing the wood in its natural tones thereby highlighting the grains in it, furniture units with industrial  accents to marry it all together.

Voila! What do you think?!

Top Left: Bird cage top made into a hanging light sourced from Chor Bazaar, Facing the TV is the couch from FreedomTree upholstered in-house in canvas on sides and leatherette on body, Cassette top coffee table from Bliss; Top Right: Like Minded People Logo incorporated in the details of the filing cabinets, made to order cage filing trays resting on the racks. Bottom right: Mixed teak wood drawers bought from various scrap markets and channelled on the desk tops; Bottom left: The wind versatile chairs from Defurn – a definite highlight to the accounts section and the vintage industrial stool – a rare from Chor Bazaar.

Most of the furniture and lights are made using southern plywood and plumbing pipes, some of them are finds from the dungeons of Chor Bazaar, Nal Bazaar, Oshiwara Old Furniture market, all located in Bombay. The rest of them, the high stools, office chairs, couches bought from new and upcoming discoveries in the city (all sources mentioned tagged*)

All work and no fun makes Jack a dull boy and we like to have all fun! Piyush didn’t want a desk for himself, “I will sit on the couch” -cutdown on chaos to seat his crew- “lets use all the window panes”, “befit the accounts for they will be the only permanent ones” and “some space for Ruchi (the producer who likes pink) but strictly no pinks in the office!”  – it was to be fresh and functional and fun! 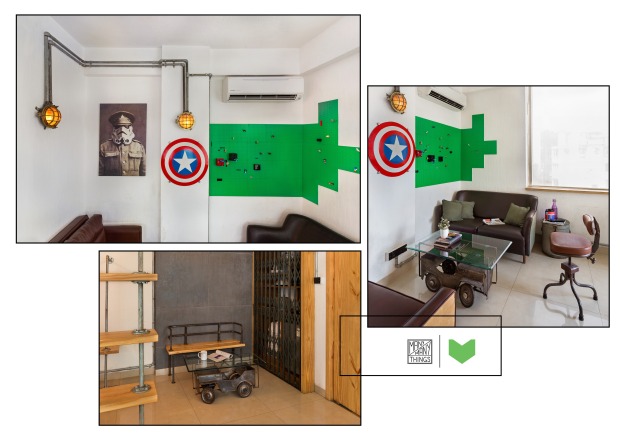 This area marked by a sliding glass partition is the territory for all meetings – this is also where we get playing with them lego blocks! The battle ground is lit with wall brackets that are ship antiques sourced from Chor Bazaar, Couches from Freedom tree, upholstered in canvas and leatherette. The ace to our finds is the tin metal jeep car converted to be a coffee table on wheels!

We worked 16 hours a day, everyday to get this project completed on time only with one thing in mind “DO EVERYTHING YOU LOVE”. This inspiration card from rubberband products is something that is still pinned to the boards of Like Minded People. The design team – Dhara Jain (glorified carpenter)  Milouni Mehta (technical and sensible support) and Ria Jain (little one giving us all moral support) thank you for everything! 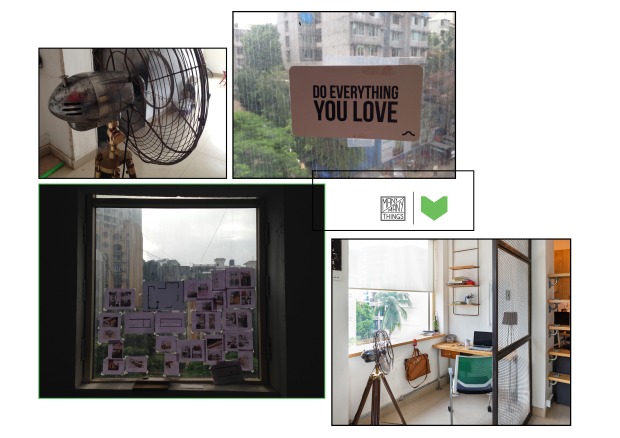 Left: Running the wiring on the ceiling, Mid Top: Swatches to the couches, Mid Bottom : Testing the stability of the pipes we were to play with, Right: Sparks from welding the table bottoms of the accounts section

The ceiling and the plan

Brand identity has been designed by Harikrishnan Panicker aka Thumbdemon and was the bed rock for the chosen mood, theme, colours – and what more did we want!